The Struggles of Roma in Kosovo 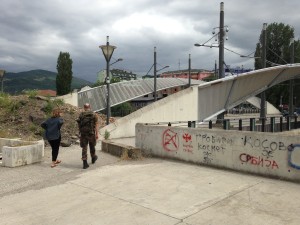 The author and Jacqueline Bhabha at the Mitrovica Bridge, which separates Albanians in the south from Serbians in the north of Kosovo.

In December 2014, local residents of Llaushë/Lauša village, in the city of Skenderaj in northern Kosovo, approached the Department of Forensic Medicine and reported a possible mass grave in the village cemetery. Four bodies had been buried there in the late nineties, during the Kosovo War, they said. In late April of this year, forensic experts from the European Union Rule of Law Mission in Kosovo (EULEX) exhumed the remains for further investigation.

Most of the time, the challenges faced by Roma people in Kosovo attract hardly any attention. But over the last several weeks the media have intensively questioned the exhumation. Some journalists have called it a “mistake,” claiming that the site is in fact not a mass grave, and that the remains had originally lain elsewhere and been reburied in 2002.

Media reports identify the remains as belonging to a Roma mother and two of her children, with one other person, who were killed on March 5, 1998, during the war, together with members of the prominent Albanian Jashari family. According to one report — which cited a resident of Llaushë — the bodies were first placed in a garage by Serbian forces following the end of military operations. The remains were then buried in the Jashari family cemetery with the slain family. After the war, because they were not members of the family, the bodies of the three Roma individuals were removed and reburied in the village cemetery, where they were found in December.

The story in the media centers on EULEX’s involvement rather than on the Roma losses. The exhumation is discussed without questions or comment about the state-sponsored wrongs inflicted against Roma people in Kosovo. Prior, during, and in the aftermath of the war, and even after NATO deployment, there were reported killings of Roma, Ashkali, and Egyptians in the region. Suspecting the Roma and Ashkali for having collaborated with the Serbs during the war, extremists conducted horrific campaigns of ethnic cleansing.

Research on this period has recorded ethnically motivated murders of Roma throughout Kosovo. According to some sources, more than 100,000 Roma, Ashkali, and Egyptians were forced to flee the region due to massive violence. Of the 19,500 Roma houses that stood before 1999, 14,500 were destroyed at that time.

Fact finding missions have uncovered violations such as rape, torture, illegal detention, and destruction of property on a large scale. Renewed ethnically motivated clashes occurred in March 2004. Mass unrest, violence, and civil-war like conditions were directed mainly against ethnic minorities, resulting in the destruction of a further 700 homes; 4,000 Serbs, Roma, Ashkali, and Egyptians fled in panic and fear for their lives.

Today, although the security situation has improved due to the commitment of the international community, the crimes committed against the Roma during this period have yet not been fully investigated and prosecuted. In many cases witnesses did not appear before the court, and delays and lenient sentences were widespread, in the years after 2004, specifically. Further judiciary responses, with a specific focus on crimes against ethnic minorities, are still necessary.

Measures have been taken to protect ethnic minorities in Kosovo, including the Roma, since the adoption of UN Security Council Resolution 1244 in 1999 and due to the continued presence of the international community. This is encouraging. The European Union has recently funded a large housing project for Roma in Mitrovica in Northern Kosovo, while a number of NGOs have focused on providing medical and educational assistance. Finally, with four seats in the national assembly, Roma, Ashkali, and Egyptian representatives can in theory take part in the political decision-making of Europe’s youngest country.

However, despite these advancements, much remains to be done. As noted by the Head of the OSCE Mission in Kosovo on the occasion of this year’s International Roma Day, Kosovo’s Roma population continues to suffer the effects of discrimination, limited access to education, high unemployment, and other persistent forms of marginalization. It remains to be seen whether the country is able to create a sustainable climate which can provide Roma people with a secure home, a tolerant society, and strong prospects for the future.