EPO: Abandonment of Established and Efficient Safety Mechanisms for Users

This week we received an official notification of the European Patent Office (EPO) along with the regular statement of our deposit account of 10 February 2014 with the headline “abolishment of the administration fee in case of insufficient cover of account” which at first seemed unusual to us.

Please find a copy of the official notification here.

The headline seems unusual because the EPO, which is sometimes jokingly referred to as the most expensive patent office in the world, is not normally known for a policy of reducing or abandoning any official fees. After a detailed examination of the official notification the above-mentioned “abolishment of the administration fee” turns out to be nothing else than an increase in official fees. This only comes into force when there are insufficient funds in the deposit account of a user.

Up to now, if there were insufficient funds in the deposit account on the day the debit order for a deposit of fees had been received by the EPO, the applicant could still deposit the missing amount within one month after the receipt of an official notification, in which the applicant was informed about the insufficient funds in his account. This had the consequence that the negative legal effects for the non-deposit have not occurred (see items 6.5, 6.6, and 6.7 of the Arrangements for deposit accounts (ADA)).

This was a safety net for users as they still had at least one opportunity to pay the missing amount and balance the overdraft although they did not have enough coverage of their deposit accounts.

The administration fee was moderate with 30% of the missing amount (according to EPO standards).

However, both this generosity and the safety net will be abolished on 1 April 2014. As the reader of the official communication will be informed in a short explanation in parentheses further down the text, there will be no possibility anymore to backdate the time of depositing the fees in the future. 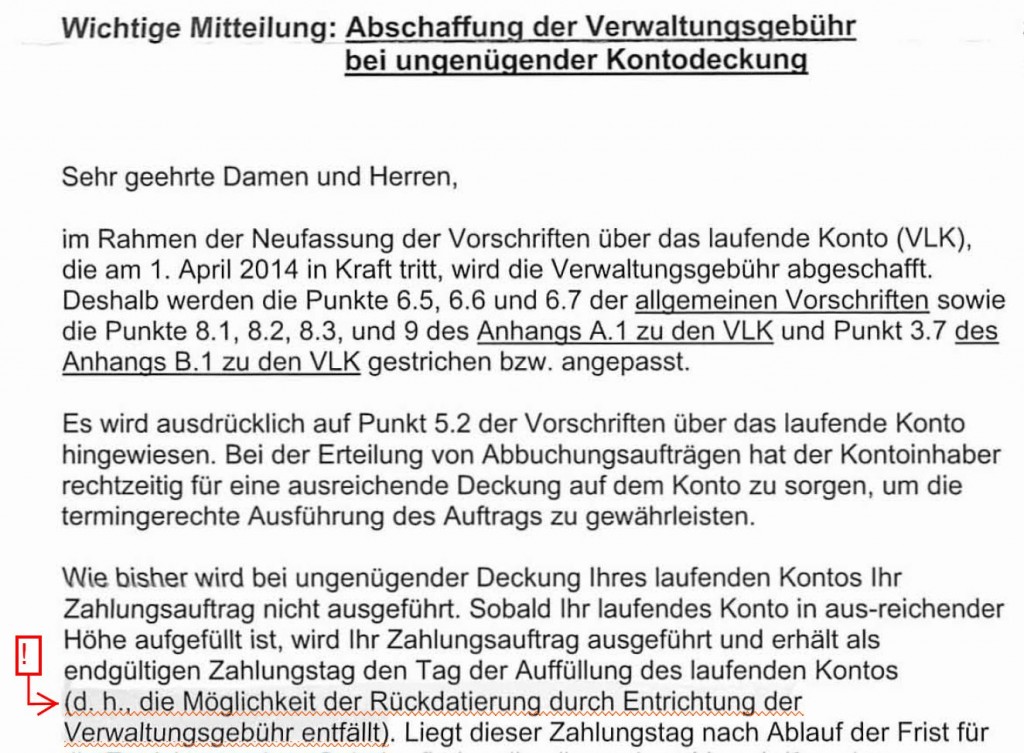 As a result, a loss of rights immediately occurs if there are insufficient funds in the account.

We cannot help feeling that by amending the user-friendly present regulation, the EPO intends to force the applicant into filing a request for a reestablishment of rights resulting in much higher administration fees of at least €580.00. The reply of the EPO to our general enquiry of 20 February 2014 concerning the purpose of these new provisions, however, seems to indicate this kind of motivation.

The EPO is obviously not being aware of or is at least accepting that a reestablishment of rights is a legal remedy which will typically not be available for the professional representatives before the EPO (meaning the law firms). Insufficient funds in the account at maturity of the administration fee are probably difficult to be argued in the context of the “all due care required by the circumstances” criteria, as the EPO believe that they have, at the same time, improved the possibility of an online account tracking (see notification of 10 February 2014 as well as reply of 20 February 2014).

In order to avoid the loss of rights after the new provisions will have come to effect we recommend the following measures:

From our point of view the change of the regulations is very unfortunate as the possible ways to pay the administration fees have been very user-friendly in the past. Instructions for payment of fees are often received close to the deadlines. In this case, the representative could be sure that the fee was considered as paid if a request for participating in the ADA procedure has been submitted.

It seems that a service which has proved its worth will be abolished with the intention to generate additional earnings for the EPO (fee for reestablishment of rights).

This entry was posted in European Law, Patent Law. Bookmark the permalink.